An Analysis of the Source 2 Engine (Part 1): The Schema System

With the release of the Dota 2 Reborn Beta, users are able to try out the new Source 2 Engine. Just recently, Valve released the Mac and Linux clients for this beta.

What does this mean?

Well, as someone who is familiar with the internals of the Source Engine, getting my hands on the Mac files for one of its games is a dream come true. This is because all the debug symbols are present in these binaries, meaning all function names, class names, and variable names are visible. The tradition has not changed with Valve’s newest engine.

In this series, I am going to be analyzing the new parts of the Source 2 Engine. As a hacker, I will also be talking about the process of transitioning from Valve’s old engine to the new one, as Dota will inevitably completely transition to Source 2 (other games may as well).

At the time of writing this, the Source 2 SDK has not yet been released, so it is mostly reverse engineering.

A Brief History on Source Networking and Classes

In Source 1, classes on the client that needed to be in sync with the server utilized networked variables (and client prediction, but that’s not important right now). This means that when a networked class instance was modified on the server’s end, it would dispatch the modified variables to the proper clients.

An example would be an entity’s health, or its uninterpolated position. Once those are modified on the server, it dispatches the information to clients it deems valid (like ones that have vision of the entity), and that data would be replicated accordingly on the client. For more information, click here.

One of the most important parts about networked variables (for a hacker or modder) is that for a variable to be networked, the game must expose the offset to this variable, relative to its object base. That way the client will know what to modify once it receives an update from the server.

Retrieving these offsets involves calling CHLClient::GetAllClasses which returns the head of a ClientClass linked list.  One would then traverse each ClientClass::m_pRecvTable by iterating over each of its RecvProps and retrieving the prop’s offset.

While networked variables are certainly advantageous for getting an idea of how a class works and mapping them out, there are still many variables that are not networked within these classes. Such variables do not have their offsets exposed like networked variables. This means there is extra work needed on the reverse engineer’s end to find non-networked member variables residing within a class.

Source 2 however, changes the ballgame completely.

With the release of Source 2, there is now a Schema system used by its many modules. This Schema system is used to create very detailed descriptions of Classes, Enumerators, and Types. Many classes have a Schema binding with detailed descriptions of their members and inheritance, even if they don’t contain networked variables. There are even full listings of many Enumerators that were in Source 1, but were not exposed.

Digging deeper, ClientClass is a smaller part of a much more ambitious solution. There is a whole module called schemasystem.dll which is the core of this new Schema system responsible for mapping out and describing many of Source 2’s Classes, Enumerators, and Types.

CSchemaSystem‘s virtual method table is laid out in the Mac x64 libschemasystem.dylib like so:

The important functions to focus on are:

Both of these functions return a CSchemaSystemTypeScope* variable for doing operations under their scope.

That being said, these two functions will allow iteration over the many Schema definitions that were defined within their scope. While there are no direct functions to iterate over the Schema definitions, they are still stored within the CSchemaSystemTypeScope at offset 0x450 for classes, and 0x1C90 for enumerators (32-bit). The Schema they operate on differ completely from eachother, so it is imperative to use the proper scope for the Class/Enumerator/Type to operate on.

CSchemaSystemTypeScope‘s virtual method table is laid out like so:

FindDeclaredClass can be used to find a class declared within the CSchemaSystemTypeScope that it’s called from. It will return a CSchemaClassInfo* which is basically an empty class which inherits from SchemaClassInfoData_t.

SchemaClassInfoData_t is the class that describes — in astonishing detail, many classes in Source 2.

That is exactly how Source 2 has SchemaClassInfoData_t set up, from the variable names to the variable types. That is because not only does this new Schema system describe classes, it actually also describes the very classes that it uses to describe other classes.

For proof, there are 3 hidden console commands that Valve has in Dota 2 Reborn. 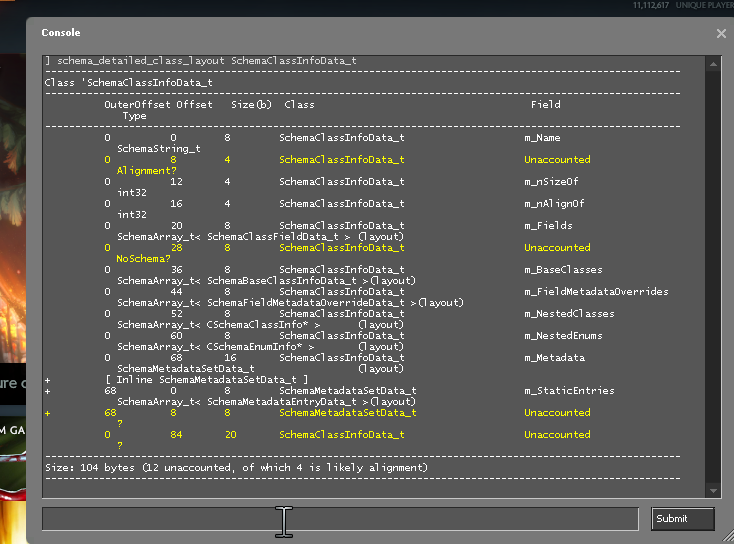 The “Unaccounted” portions of the dump were named by looking over the class info area in the Mac binaries, to determine what those areas were for.

The second “Unaccounted” piece of data is a SchemaArray_t <SchemaStaticFieldData_t> used for describing static members of a class. This is something that Source 1 did not do. Here’s an example dump.

Using the previous information, an SDK generator can be created. The goal is to create header files that can be used in a cheat or mod to streamline the process of creating interoperability with the game engine.

Source2Gen does exactly this. It creates headers for many of the exposed classes and enumerators residing within the target Source 2 game.

An example class that it will generate:

The repository can be found here.

Planetside 2 and H1Z1 generate hashes for specific intervals of data within some data structures. In H1Z1, a lot more areas have this type of data tampering protection enabled. If the stored hash is not equal to a recently generated hash, the game will force an exception and crash.

In this example, it’s going to be used to bypass the data tampering protection contained within weapon firemode data for Planetside 2.

This is how Forgelight detects data tampering.
C++

A little side note: The game also sets a bool to true when it finds that the hashes do not match eachother. I believe this bool is stored right after the hash.

Pseudo struct layout of the firemode, showing how the anti-data tampering works: